Simply suffering an injury is not enough to win a personal injury lawsuit. Proving your right to compensation requires establishing the defendant’s liability with clear and convincing evidence. This evidence can take the form of witness testimony, expert statements, medical records, and demonstrable evidence.

Demonstrable evidence refers to objects, pictures, models, and other elements that an attorney can present in a trial to prove his or her case. This form of evidence can help demonstrate the severity of an injury, proof of harm, and other elements necessary to secure a settlement in your lawsuit. 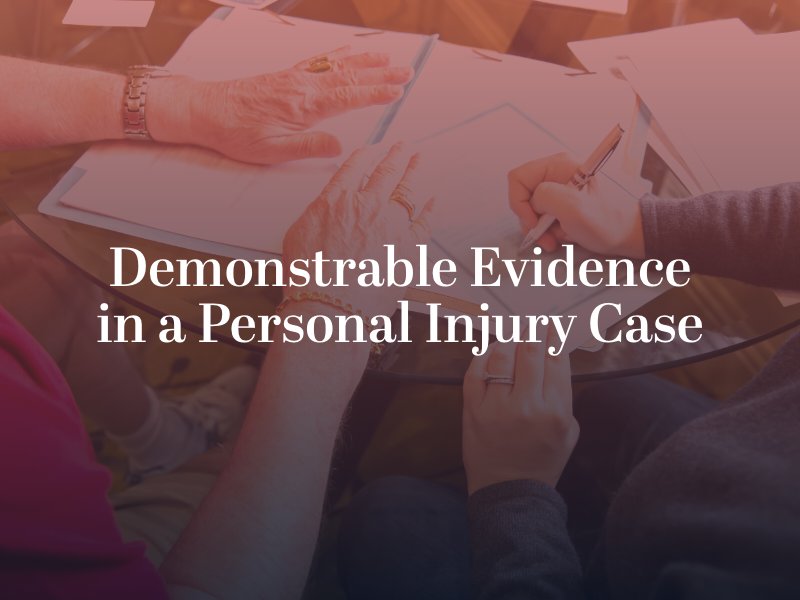 Demonstrable evidence can take many forms depending on the fact that the attorney is using it to prove. The main feature of demonstrable evidence is that it is visual, allowing the judge and jury to conceptualize the severity of the injury, the actions of the defendant, and the nature of your damages and losses.

Common types of demonstrable evidence include the following.

How Is Demonstrable Evidence Used?

In a personal injury case, you must establish the defendant’s negligence to secure compensation. You will need to prove three important facts to accomplish this: the defendant owed you a duty of care, he or she breached the duty of care, and this breach of care directly caused your injuries and losses. Your attorney can use demonstrable evidence at multiple points during the case process, especially when establishing the breach of care and how it caused your injuries and losses.

For example, say that you suffer a broken bone in a truck accident after a driver runs a red light. Your personal injury attorney can submit x-rays of your broken bone as evidence of your injury and use surveillance footage from the traffic camera to establish the defendant’s actions. He or she may also commission an animated video that breaks down how the accident occurred and the injuries you experienced due to the injury.

For example, say that you are pursuing compensation for the loss of a limb after a workplace accident. If your attorney were to submit a photograph of your severed limb as demonstrable evidence, the judge may deem it too shocking to present to the jury, likely to sway the opinion of the jury, and therefore prejudicial.

If your attorney were to submit x-rays of your severed limb as another piece of demonstrable evidence, the judge is likely to approve it. This type of evidence presents the nature of your injuries in a non-shocking way that is unlikely to influence the jury improperly. In this case, the x-ray will be probative evidence.

If you are suffering from harm due to the negligence of another person, speak to a lawyer as soon as possible. Personal injury lawsuits require a great deal of evidence to prove, and hiring an injury attorney will provide you with access to these resources. Your lawyer will explain your legal options and begin collecting necessary evidence to prove your right to compensation.