Is Lane Splitting Legal in Texas?

Motorcyclists often navigate around blocks of traffic using a technique known as long splitting. This practice occurs when a motorcyclist drives between cars on the road, weaving in and out of the gaps separating the vehicles. In cases of severe gridlock, motorcyclists may lane split through multiple lanes of traffic.

While it is legal in some states, lane splitting puts motorcyclists at risk of serious injury and death. Despite efforts to legalize the practice, lane splitting is illegal in Texas and lane splitters may be subject to a $175 fine. 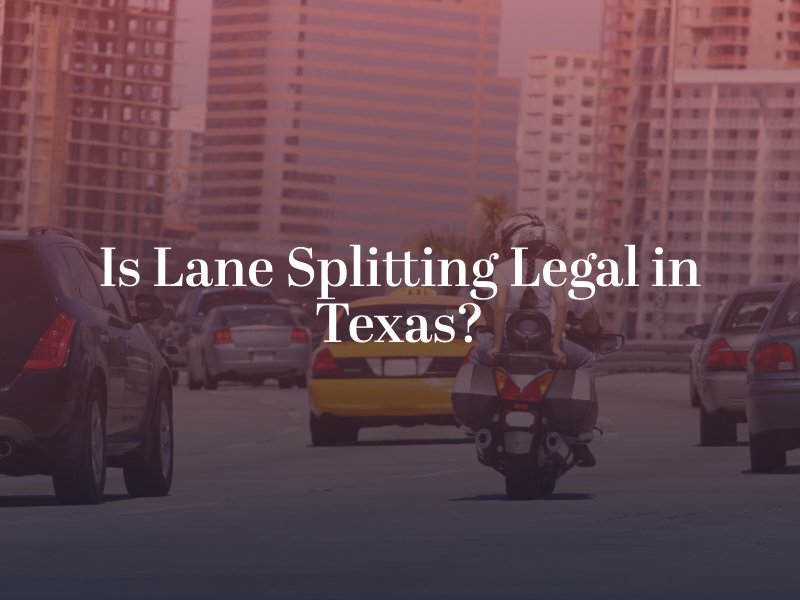 For these safety reasons, lane splitting is illegal in Texas. However, this practice is only illegal because there is no specific law that allows motorcyclists to move between vehicles within their own lanes. There are traffic laws that require vehicles, including motorcycles, to remain in a single marked lane while driving and to only leave the lane when it is safe. Since lane splitting requires motorcyclists to maneuver next to moving traffic and puts them at risk of a collision, Texas officials consider it an unsafe lane change. As a result, lane splitting is illegal under this law.

If you are in a motorcycle accident while lane splitting, it is very important to understand liability. To recover compensation for your injuries, you will need to prove that the at-fault driver caused the accident. If you are filing an insurance claim, the adjuster will conduct an independent investigation and determine who is responsible. If you are filing a motorcycle accident lawsuit in Houston, you will need to present clear evidence to establish the at-fault driver’s negligence.

Since lane splitting is an illegal and dangerous practice, your award may be at risk. The insurance company can deny your claim, stating that you were at-fault for the accident due to the dangerous practice. In a lawsuit, Texas’s modified comparative fault rules may reduce your award.

If the court believes you are partially liable for the accident, it will assign a percentage of fault. The court will then reduce your final award by the percentage of liability you share. For example, in a lane splitting case, the court may assign you 30% of the fault. If you ask for $20,000 in damages, you will only receive $14,000. If you share more than 50% of the fault, you will not receive any compensation.

Should You Hire an Attorney After a Motorcycle Accident?

Although lane splitting may be a common practice, it is still dangerous. If you are in an accident while lane splitting, you will need someone to advocate for your side of the story so you can recover the compensation you need. In these situations, a Houston accident lawyer can help.

Your lawyer will take the time to listen to your story and explain your legal options. He or she will work to craft a compelling case in your favor, defending you against accusations of liability. As soon as possible after your accident, contact a personal injury attorney to discuss your optimal path to compensation.