Spoliation of Evidence in Texas

To win a personal injury case, you need to provide clear evidence that proves your right to compensation. This evidence can take on many forms, including medical records, surveillance footage, witness testimony, and models and diagrams. In some cases, however, the at-fault party facing litigation may fail to properly preserve evidence for your claim. This act is known as the spoliation of evidence. 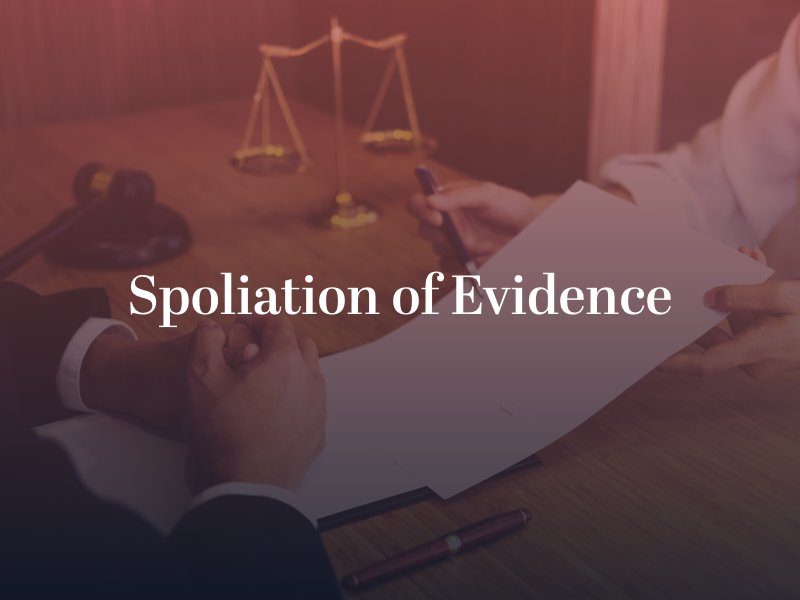 What Is Spoliation of Evidence?

Spoliation is a legal term that refers to the failure to reasonably preserve or the destruction of material and relevant evidence that may be used in a court proceeding. The person who is in possession of the evidence had a duty to preserve this evidence, and either knew or should have known that an injured person would intend to use it in his or her claim. Common types of evidence found in spoliation disputes include surveillance footage, social media posts, maintenance records, and other types of electronically stored information.

Prior to establishing its current framework, Texas courts responded to spoliation of evidence by presuming that the missing evidence would have been unfavorable to the party that destroyed it. A 2014 Texas Supreme Court case, Brookshire Brothers, Ltd. v. Aldridge, has changed how courts approach spoliation of evidence in the state.

However, the grocery store’s surveillance cameras recorded video in a continuous loop. Approximately one month after the fall, the cameras recorded over footage from before the fall, preventing the plaintiff and his personal injury lawyer from identifying the source of the spill and whether any employees saw it and failed to clean it up. This evidence would have been material to the case.

At the conclusion of the Brookshire case, the plaintiff won a large verdict, but the Texas Supreme Court reversed this decision. It clarified new rules regarding spoliation of evidence in its opinion.

Texas’s Framework for Spoliation of Evidence

The Texas Supreme Court found that the trial court that heard the Brookshire case abused its discretion in allowing the jury to hear the evidence about the spoliation. The court also asked the jury to consider the spoliation of evidence in its deliberation on the lawsuit’s merits. The Texas Supreme Court found that this approach is inappropriate and set forth new guidelines.

To analyze the spoliation of the evidence, Texas courts must undertake a two-step judicial process.

Texas and federal laws regarding the spoliation of evidence are often under scrutiny. To ensure that you protect your case and understand the legal basis necessary to hold defendants accountable for these actions, it is important to seek the help of an experienced lawyer. Contact your attorney as soon as possible to discuss your case and gather the evidence you need to prove your right to damages.